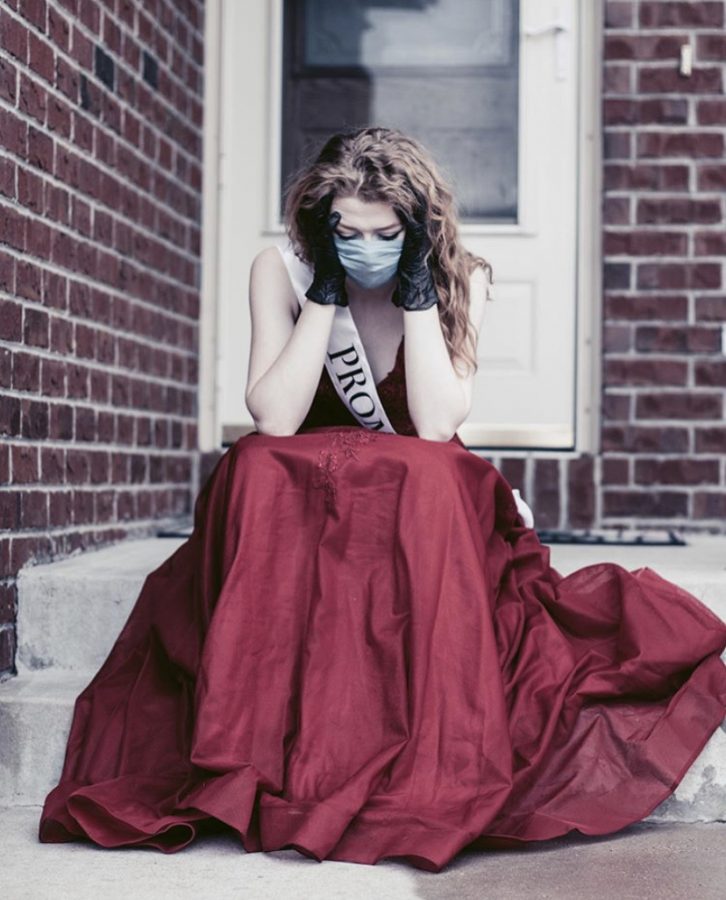 Sienna Adams dressed up in a dress that was supposed to be at her local prom.

Billions of people gathered onto a single planet are bound to come across the complexities of survival. The horrendous possibilities that are written down and remembered are thus known as history. Under those terms, we are living in history right now.

With the cancellation of school almost nationwide, jobs being called off if not considered “essential” and people only going out for necessities, this is affecting everyone. This mandated “self-quarantine” and “ social distancing” has both been ridiculed and taken very seriously, similar to the virus itself known as COVID-19.

Junior Caleb Mullins said, “It’s like a normal flu season except the difference is media coverage… It’s getting as much attention as a plague but is next to the flu severity.” He went on to say, “Herd immunity – we are just spreading out the duration of it, we should just get it then get over it.”

On the other end, Junior Benjamin Spears said, “This is more shocking than surprising, but my mom has conference calls at work with people from all over the world. One of them is from Italy. He’s named Mario. Mario’s family went from a happy family of 6 to merely 2 due to COVID-19. It’s just him and his youngest son.”

The comparison between the quotes from Mullins and Spears is almost pulling rope, one saying the virus is equivalent to the flu and the other showing where someone has personally experienced death from COVID-19 within their own family. They’re plain examples of the divide between the world and their views on the situation at hand.

With all of the drastic emotions, changes in the economy, basic living procedures, and seeming as the world is falling to pieces around us, how could this not be something in history for years to come? With all the ways of communication and publication to spread information, this will not be forgotten. The videos, pictures, and just basic memories of this will be shared through generations. COVID-19 will not go by unheard for years to go by.

O’Malley stated, “I believe this is a very big moment in our history and it will be marked in our textbooks one day. We’ve had to change our whole society, children are no longer going to a traditional school, many are out of a job, and those that are, risk themselves and the people they live with everyday. We’ve experienced an economic change too, gas prices are very low in most places, and people are being told to simply not leave their homes unless they need what are considered “essential” items.”

Senior Erynn McConkey said, “This virus has spread quickly and since there’s no known cure, it could be around for awhile.  We don’t know much about the virus but some people have shown symptoms a couple of different times, meaning this could be a virus that never goes away.”

With the endless amounts of coverage of the situation, every point of view is being recorded and documented. Some are expressing ideas on how to recover quicker and others are expressing the possibilities that the virus could be haunting us for a long time. This could  however, with hope within us that this will come to an end one day, we will all remember this time period as just a dark time within history.