A Season to Remember 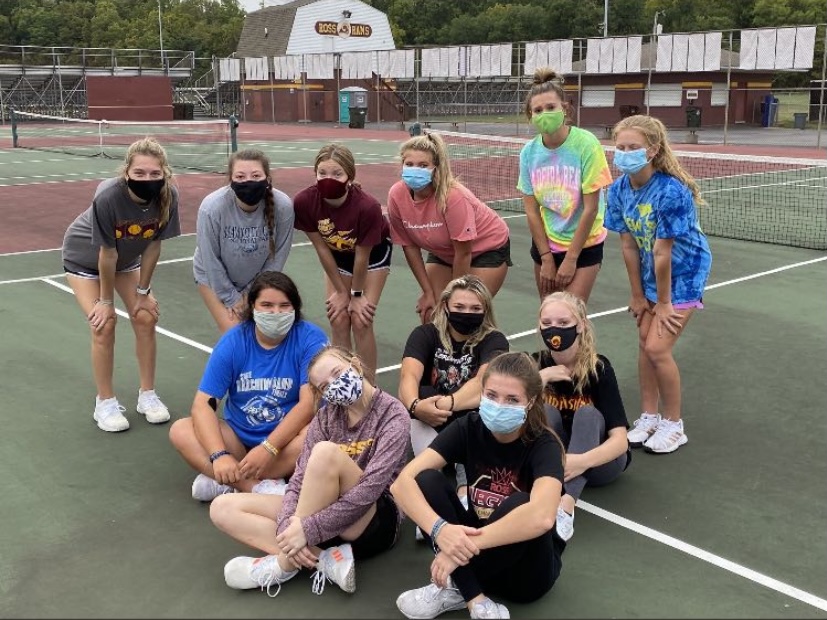 After a tough practice the girls' tennis team poses for a picture.

Despite the many changes that the Ross High School girls’ tennis team has faced, they have been able to rise above them and come back better than ever.

The girls’ varsity tennis team claimed the title of overall SWOC champs with an overall record to date 14-5.

When talking about all the different precautions and protocols that were put into place, varsity head coach Gerri Bolin stated, “Although many of the fun parts of being on a team that doesn’t involve actually playing the game (bus rides, stopping to eat, etc) couldn’t happen, looking back to just seven months ago when the boys season was canceled due to COVID, we are grateful for the opportunity to step out on the court and compete each day.”

Although it is a shame that these things had to be avoided due to COVID, that did not stop the girls from enjoying their season and each other.

“Winning the SWOC tournament individually and as a whole team was the best part of this season,” stated Junior Thia Mohr.

Junior Madalynn Abrams said that one thing that made a big difference this year was the team bonding and becoming closer.

Abrams stated, “It was usually only the 7 varsity girls practicing and we had over 20 matches this year. We also started practice in early August and spent basically the last 3 months seeing each other every day.”

“My favorite part of this season has probably been starting tennis for the first time, improving and making new friends,” stated Guckiean.

Although this season just came to an end, the girls and coaches are all looking forward to next season.

Junior Kayla Adams stated her hopes for next year are, “being able to be closer and not have to worry about getting each other sick.”

The team also plans to push its limits next year as well.

Coach Bolin stated, “We expect to have another strong team with the goal of competing for a conference championship.”

If you are interested in joining the girls’ tennis team you can email Coach Bolin at [email protected]. Be sure to catch one of the matches next year, it is sure to be a good one!