Lessons Right Off the Big Screen 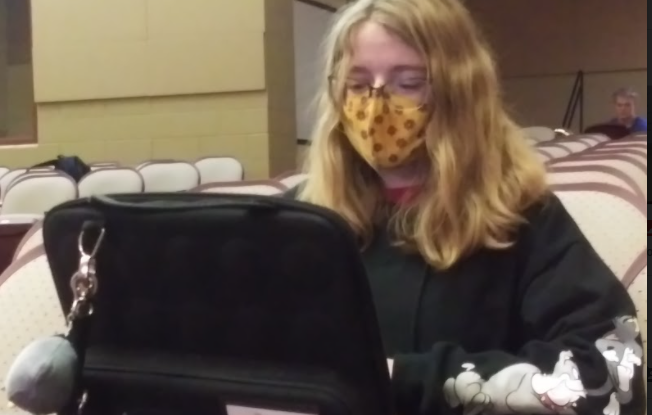 Becky Young, senior, watches a movie on her chromebook during a free period.

As life moves on during one of the lonely times, that influences us in a way deeper then we’ll ever know. While old movies may be outdated, they still teach us many lessons about connecting to other people.

The first relationship up for examination is that of Holly Golightly and Paul Varjak from “Breakfast at Tiffany’s” played by Audrey Hepburn and George Peppered respectively. This pair of legendary lovers lead a rocky and bumpy start with Holly’s noncommittal personality and Paul’s heavy workload. It comes to a head when after a run in with police, Holly decides to flee to Brazil prompting Paul to reveal his plans to propose to her and leaves scorned. After reuniting in a rainy back alley, the two make up. What this teaches its audience is that love is never easy and the hardest fought battles are the most rewarding.

Ria Collins, Director of RHS drama club, shared what was a notable relationship.

“’The Devil Wears Prada’… Anne Hathaway and Meryl Streep… the beauty of the relationship is that Andy (Hathaway) has mold to what Miranda (Streep) needs; she is supposed to adapt and she does by the end she makes a choice that the relationship does not work for her,” Collins said.

“The Devil Wears Prada” is often cited for its wonderful showcase of how people grow from each other both in the professional and personal world.

Collins went on to state that “She Andy grew from Miranda to become her own person and Miranda learned there are people who still care for her. Art is a relation of life and what you see on film or story you can see the positive and negative.”

Another example shared by Collins was that of “Dead Poets Society”.

“…I use it to teach my own students about installing passion and to think outside the box. He develops a negative relationship with his coworkers so I build trust with the other teachers and staff.”

Here Collins identifies with the main character and his troubled relationship. She also learned to value her work relationships more from this film.

In a survey given to RHS students and staff, Technology Director Andy Klaber shared his thoughts on what viewers can learn from movies.

“I believe that there are always things that we can learn about relating better to others.  Any type of medium (print, video, etc.) expresses how the author sees things, which could provide us with an opportunity to reassess our beliefs, good or bad.”

But movies aren’t the only media to learn from. Amanda Meyer also talked about a TV show called “The Vampire Diaries”.

“Please talk things out and don’t keep secrets from each other,” Meyer wrote.

Dishonesty is often cited as a relationship killer.

Some say that advice can be picked up from movies, so maybe more people should invest more time in catching the latest movies. From love to work many movies offer model relationships to learn from to, hopefully, avoid any possible hiccups in any relationship.