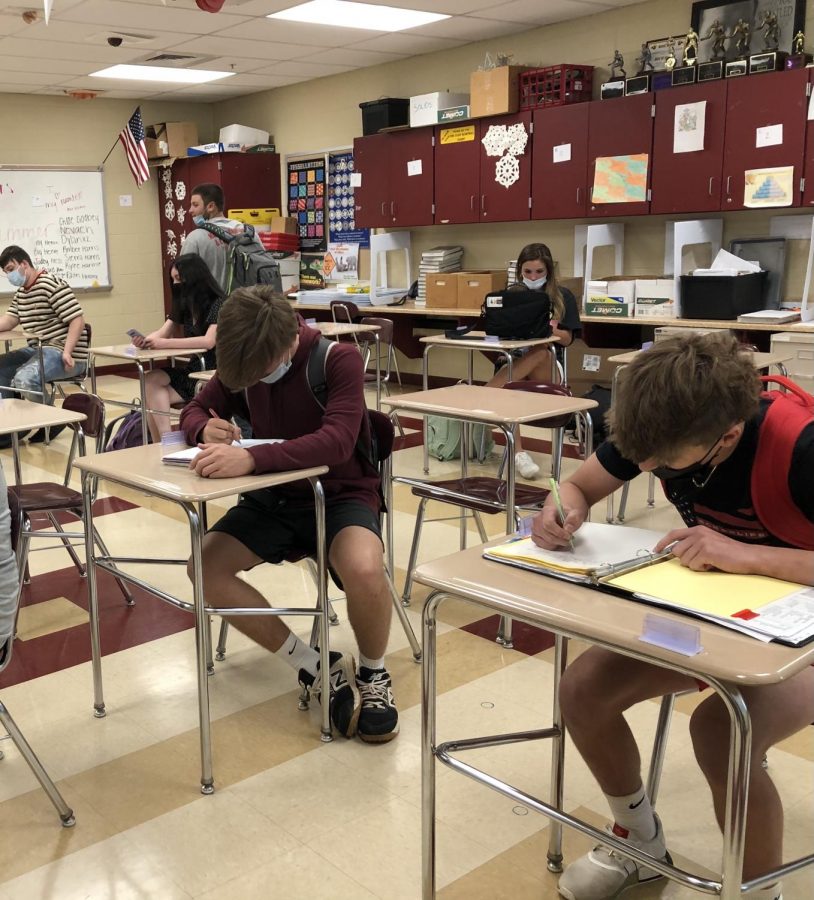 Masks, vaccines, lockdowns, and other restrictions: A topic so seemingly simple, yet carries such a level of controversy, and many questions. Is the government overstepping boundaries? Are they doing enough? When will things go back to normal? Is this our new normal? So many questions, and so little answers.

In 2020, when COVID-19 arose in the U.S, there was a frenzy that swept the nation. Suddenly borders were getting shut down, toilet paper and hand sanitizer were suddenly erased from existence, and no one knew what was happening. States were shut down, masks were mandated, curfews were in order, and hope was nowhere in sight.

Then, there was a sliver of hope on the horizon: The COVID-19 vaccine. In December of 2020, when former President, Donald Trump, announced the release of the vaccine, there were praises from rooftops. But with the hope of the vaccine, skepticism followed near.

Soon after the vaccine was released, many people questioned whether it was safe or not, due to how quickly it was produced. But it was okay then, because they could just opt out of getting it. But now there’s talk of the vaccine being mandated. And people are asking, should that be allowed?

Sophomore Brayden Burt said, “I also don’t like many vaccines being created, they have used human cells in their creation from aborted fetuses [which is confirmed by research], that to me is a scary thought, not to mention the companies that made them have no liability. It’s one thing to create a health product, it’s another thing to mandate it.”

Another thing life is hard to live without right now are masks. Everywhere you go in the state of Ohio requires them. And unlike the vaccine, the government has mandated these. But like the vaccine, they’re using everyday things we can’t go without to enforce them. Such as school, work, grocery shopping, etc.

Burt also said, “I do not believe in masks, nor vaccines, yet I’m mandated to wear one to attend in-person schooling. I think that a government entity mandating anything health based takes away from what our founding fathers believed in, and freedom itself.”

And then there are lockdowns. Lockdowns have seemingly had a splinter effect. The suicide rates are predicted to be significantly higher. According to NPR, one hospital in Indianapolis, saw a 250% increase in suicide attempts in teenagers, in October 2020 compared to the ones in 2019. The obesity rates are at 42.4% which is the highest it’s ever been. And if obesity rates are higher, the repercussions of obesity, such as high blood pressure, heart disease, and high cholesterol. Additionally, the amount of people who have died due to drugs have increased.

Whether or not lockdowns are necessary is still up for debate.

Burt went on to say, “I definitely don’t [think these mandates are necessary], here we are 1+ years through COVID-19, and businesses are still closed down! Business owners are suffering, and the American legacy itself is at stake. No one should be mandated to lock down, or be mandated. Many people think that their rights are given to them by their government, I do not believe this. Personally, I believe that God gave me my rights and no one, no government entity, can touch that. And I know that these days that is a controversial opinion.”

Many people question if lockdowns are doing more harm than good.

Burt said, “I definitely think that it is harming society, by eroding freedoms of Americans and weakening the economy. Many Americans are relying on social welfare [from] the government, and that is very dangerous. Americans are losing money, and losing their freedoms.”

And could that be a scary thought? As a society, are we going to look back at this time to see the travesty that spewed from lockdowns? Or are we going to look back and be proud that we stay locked down? Some people look at it as losing either way. It’s either risk getting and spreading COVID, or lose people with mental health issues. But when do we as a country choose which one is more important to combat?

But that’s for each person to decide, as some people such as, sophomore Morgan Barnes, believe other choices are up to each individual.

That’s the whole point of our constitution, to protect each individual’s personal freedoms. So, my question for you is, at what point, do you believe your freedom is being taken from you? And what will you do if it gets to that point?

The Ross High Times attempted to reach out to 3 sources with opposing views, but those attempts were unsuccessful.