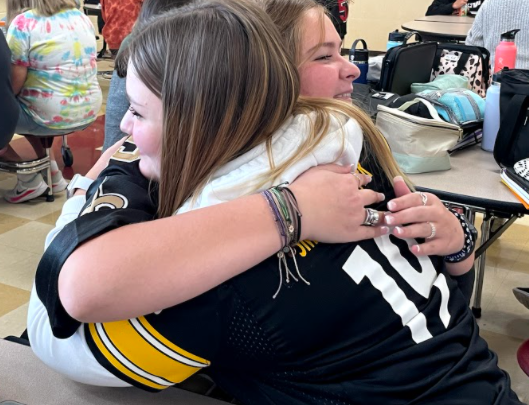 Taylor Willsey and Lydia Trout hugging it out after discussing their feelings and choosing to forgive one another.

What would Jesus do, more widely known as, WWJD. It looks really cute on a bracelet right, but what does it look like to actually carry that out?

Let’s be clear, I’m just as guilty as the next person, that’s why I’m calling us out. We can’t be an effective unit of Christ if we can’t forgive those who have hurt us. I’m not saying it’s an easy task, in fact, it’s arguably the hardest act of love. Good news though, God gave us an amazing book that has all the information on how to properly forgive someone, the Bible.

In order to efficiently forgive, we have to understand what kind of situation we are dealing with. In Luke chapter 15 we see the story of the prodigal son. Basically, there was a man who had two sons. One son took his inheritance and spent it all. After hitting rock bottom being dirt poor and eating out of a pig’s trough, he then came running back to his dad, let’s call him the spender. The other son didn’t take his inheritance, he chose to stay home and continue working hard on their farm, he’ll be referred to as the worker. When the spender came back home his father was overjoyed and quick to forgive his son for what he had done. Naturally, the worker who had stayed home and did hard labor was incredibly upset. He felt that his brother didn’t deserve forgiveness because it was his fault he ended up the way he did.

It’s here that we see the two types of forgiveness needed: the spender was in dire need to forgive himself for the vacuous decisions he had made, the worker, who needed to learn how to forgive his brother, even though, he didn’t deserve it.

If you relate to the spender and need to forgive yourself of something, I encourage you to look to the Lord. He wants to hear from you. Just like the father in the story above, God is waiting for you to come back home, you are never too far gone for his love.

1 John 1:9 states, “If we confess our sins, he is faithful and just and will forgive us our sins and purify us from all unrighteousness.”

If you are more like the worker and need to forgive someone else, then it’s time to lift it up to God. If you’re struggling with the idea that the person isn’t worthy of forgiveness just remember, neither are you, neither am I, and neither is anyone else. Yet, God still forgives and loves us.

Julie Woedl, Jesus enthusiast and follower since 2016, shares her take on forgiveness, “The question to ask ourselves is did Jesus die for that person? And the answer is always yes. So are they worthy of our love? Yes. It’s always yes because he died for that person too.”

In Luke 6:35-36, Jesus declared, “But love your enemies, do good to them, and lend to them without expecting to get anything back… Be merciful, just as your Father is merciful.”

We can’t truly consider ourselves kingdoms workers if we have hatred in our hearts. Hatred isn’t just an emotion or a feeling, it’s the devil. When the devil has rooted himself in your heart, you can’t love others the way they need to be loved. You have to have the courage to deny the devil and choose love, for love drowns out all evil.

Ephesians chapter 4 verses 31-32 state, “Get rid of all bitterness, rage and anger, brawling and slander, along with every form of malice. Be kind and compassionate to one another, forgiving each other, just as in Christ God forgave you.”

No matter where you are on your faith journey, forgiveness begins with speaking to Jesus. When you ask God to purify your heart and thoughts, you are able to truly forgive, and not just go through the motions. The Holy Spirit will come over you and it will be an undeniable feeling of freedom. I encourage you to not only forgive yourself or someone else, but to share it with others, inspire them to do the same, I’ll start.

A couple of weeks ago I decided it was time to finally forgive my uncle. He’s struggled with drug addiction and is currently incarcerated.

Growing up my grandparents were my safe haven, but they never failed to choose my uncle over us grandchildren. At one point we had told my grandparents that as long as my uncle was living with them, us kids wouldn’t be allowed over unless we had a parent present, they chose him anyway. What was once self-pity feeling like I wasn’t enough for my grandparents, quickly turned into fury. I was upset with my grandparents, but I was especially furious with my uncle.

For a really long time, I held this ball of fiery hatred of him in my heart. I wanted nothing more than to see him behind bars until one day I finally decided to give it to God. I prayed with a leader at church and I can honestly say I love and forgive my uncle. I forgive him for the pain he’s caused not only to me but my family and himself. I pray that one day he will call himself a child of God too.