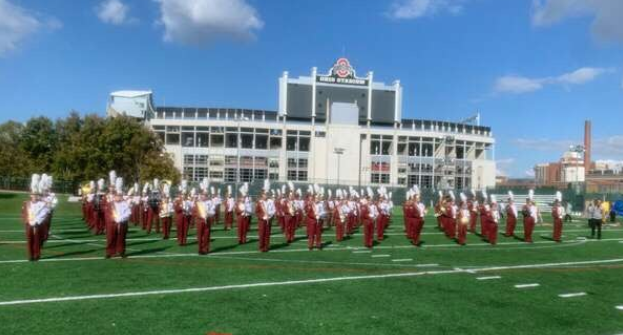 The Ross High School Band of Class stands ready to compete at the Buckeye Invitational.

This year Ross High School Band of Class has been kicking butt and taking names. From the competitions to the Friday night football games, they never fail to impress and entertain their audience.

Each year the band picks a theme and this year’s show is “Seven’s”.

The band is thankful for their opportunity to perform this show at football games this year. Last year, due to Covid, they were not able to attend or play at any football games or competitions. The band was also able to make their annual trip to band camp over the summer.

“Staying the night at band camp gave me the opportunity to get to know the freshman better and bond with them,” stated senior, Cora Stevens.

In addition to playing at football games, the band has been busy competing in competitions around the state.

At each of these competitions, the band competes for a rating from the Ohio Music Education Association based on the standard they have met. The ratings range from superior-one, excellent-two, good-three, fair-four, and poor-five; these ratings then determine their ranking overall.

Senior Sami Gassman stated, “We got a two[sic] at the first two[sic] competitions, and the rest of them we got a one[sic]… We’ve progressively gotten higher scores across the board throughout the season.”

Although the scores may appear to just be mere numbers, they mean so much more to the students who have persevered and found the grit to keep pushing and get better each week.

“The best part of band had to be getting our superior because working towards it was a lot of work,” stated senior, Robert Berting.

Upon achieving a Superior Rating at the Buckeye Invitational, the band is now on their way to state. State is held at Dayton Welcome Stadium, while there the band will be judged by a panel of seven judges. Although a superior rating is always the goal, it is difficult to receive a one while competing at state.

Despite the odds, the band is confident in their ability as they journey to the state competition.

“I’m very excited for state. It’s a bittersweet experience this year. Our last performance of our last show and it will be awesome,” stated Berting.

With this year being the band’s 37th consecutive year they have gone to state, stakes are high but they won’t fail to put on their best performance yet.

All are welcome to go support the band at state on Nov. 7, tickets cost eight dollars for adults, five dollars for school-aged students and senior citizens with parking also being five dollars. Good luck to all students journeying to state, go Rams.