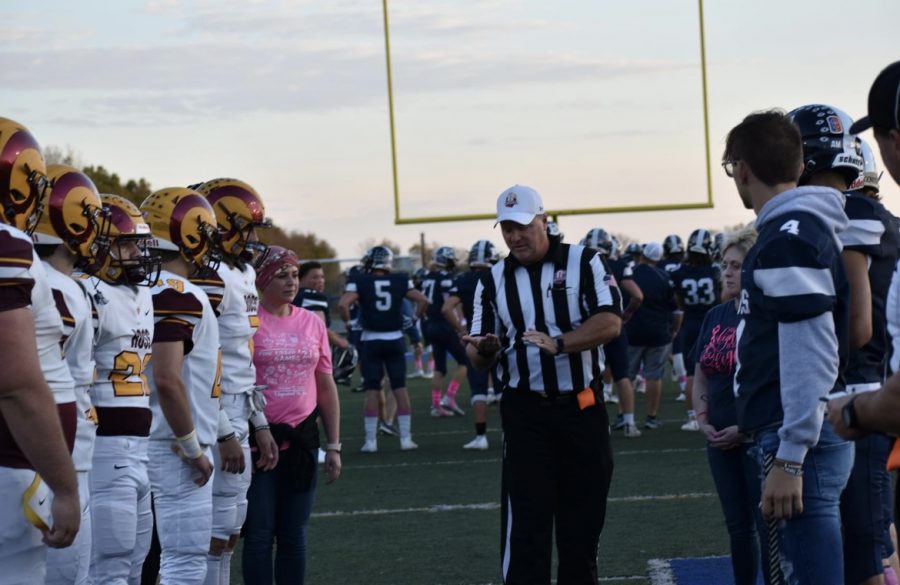 A OHSAA Official flipping a coin to start off the Ross Vs. Edgewood Varsity football game

Recently in the athletic world, sporting officials have been hard to reserve for games. This shortage has created a lot of issues and has even required teams to cancel their games. Many have stated that this is due to the disrespect officials receive from athletes and coaches.

An anonymous official stated, “Recently the disrespect from both has gotten worse. It’s hard to want to come out and give a service to people who do not seem to want it or like the way it is received. It comes from both ends I do believe but we are just trying to do our best and keep each and every athlete safe, and keep the game fair.”

Like any job, the people around us can affect how our day goes and that can be exhausting. Officials get yelled at constantly on and off the field, they are treated as if they are a luxury, as if they are given to athletes as a courtesy.

This in fact is very untrue. Officials choose to spend their time officiating. They go through certification processes and spend time learning so they can do the best of their ability to keep athletes safe. For anyone it can get hard to enjoy things when you get treated harshly.

Ross Girls Soccer Coach, Jessica Buehner, stated “I think that officials are becoming more and more scarce because the criticism they endure each game from parents, players and coaches outweighs the passion that they have for the hobby.”

Officials deal with a lot of backlash not only from teams but parents too. It is hard for parents and fans to realize how hard decisions are to be made by officials, but because of this lack of understanding officials many get criticized and disrespected by everyone around them in some instances.

Buehner also stated, “I have personally talked to officials that say they will not do so and so’s games or that they love to go to certain schools. Some schools have a reputation for being aggressive towards the officials. Some have thicker skin than others, but nobody wants to go somewhere that they do not feel welcomed.”

No one would want to go somewhere they do not feel welcomed or respected. For many officials that continue to go into these harsh environments must be superheroes, they must have a superpower being able to continuously put themselves in those environments.

“As an athletic director, I do not typically assign the officials to each of our contests. Rather, we have a league-wide assigner who takes care of that for all league schools. With that said, the general official shortage is one of the biggest headaches in the world of interscholastic athletics. We often have to schedule or reschedule based on official availability and we’ll quite often see the same officials over and over again throughout a season which can obviously be a good or bad thing,” stated athletic director Jake Richards.

The shortage is creating huge issues not only in Ross but in other places around the nation. We may be a small town school but we can create a big difference. As coaches, athletes and parents let us be better towards sporting officials, let us respect them and show them how Ross is above the standard.