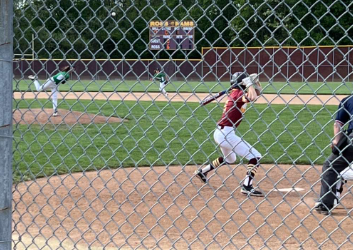 Freshman Daniel Fogt during his at bat against Harrison’s freshman team.

Why have a separate tournament for junior varsity and freshman teams when they can just be combined? That’s exactly what the Southwest Ohio Conference, SWOC, did this season for boys baseball. Varsity Baseball participates in playoffs for the state, while the JV and freshman baseball teams have their own tournament to end the season.

Both semi-finals games and the championship took place at Ross. The first round was on Friday, May 13th and the semi-finals and championship were on Saturday May 14th. Thankfully, the weather for these games was very sunny and in the low 80s.

Freshman Kerry Snyder stated, “I like the idea of the tournament… I like that they gave athletes who weren’t playing varsity a chance to play in a tournament style game.”

Unfortunately, both teams for Ross lost their first game and got knocked out of the tournament. Although the tournament did not go as planned, Ross’ JV team had a really good year by finishing the regular season with nine wins and seven losses.

Freshman Carson Sackenheim stated, “I feel both of our teams had a chance to win, but we were just not hungry enough to get a win.”

The remaining teams going into the second round were Harrison’s freshman team against Talawanda’s JV team and Northwest against Harrison’s JV team.

Junior Jacob Berger from Talawanda’s JV team stated, “I thought the championship game went good…I liked the freshman in there, it gave them a chance to upset some teams.”

Even though no freshman team made it to the championship, they still upset some other teams and had their chance to make it. Having freshmen in  the tournament let other teams show off what they could do and how much they can fight. Overall, combining the freshman and JV teams into one tournament was a good success.

Even though all Ross teams did not continue, it was a good season with bright futures ahead for all the teams next season.. If you are still attending Ross next year, swing by Ross’ games and tournaments. They would love all the support.